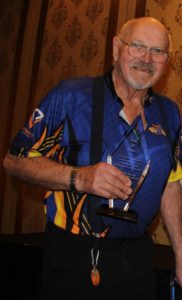 June 25, 2021 The AMOA-National Dart Association (NDA) and the darting community were saddened to learn that Stan Borup of High Country Promotions, died unexpectedly on Saturday, June 19, just four days after being honored as a member of the NDA Hall of Fame during its annual Team Dart tournament in Las Vegas. He was 76.

A steady stream of condolences has been pouring in since the news of his passing has spread, reflecting the universal respect and admiration Stan held among his NDA peers and countless industry friends he made during his decades of dedicated work to deliver, set up, maintain, tear down and return the electronic dart boards furnished by Loewen Entertainment and High Country for Team Dart.

During the induction ceremony welcoming him to NDA’s Hall of Fame on Tuesday, June 15, Immediate Past President Pat Webb noted:

“For as long as anyone can remember, Stan has been a fixture at Team Dart, going about his business without much fuss or fanfare. If anyone ever fit the definition of ‘Ironman’ in the dart world, it would be him. At 76, he doesn’t move as fast or as much as he did in the past, but his strength, stamina and work ethic are legendary in the dart tournament community.”

Born October 27, 1944, Stan Borup was the son of an engineer who worked for the Bureau of Reclamation in the U.S. Navy. As a kid, he moved around and lived in multiple locations, with stopovers in places like Cuba, Alaska, Hawaii and New Jersey. When he started his career, he worked in construction until Gary Benson of High Country Promotions asked Stan if he would be interested in driving a truck and delivering 20 pool tables for an event. As the company’s dart business expanded, Stan became a familiar face at state dart tournaments around the country, in addition to NDA’s Team Dart.

In typical modest fashion, Stan said he was “astonished” to learn that he had been elected into NDA’s Hall.  “It’s the highest honor I’ve received,” he said.

To the rest in the NDA family who knew Stan, the Hall of Fame honor was no surprise at all. It was well-deserved for a person who led by example and always carried his weight—and then some—when it came to his supporting efforts at NDA’s annual dart tournament in Las Vegas.

The family has not announced plans for services or a memorial at this time, but NDA will pass along any information when it becomes available.

“Individually and collectively, all of us at NDA are mourning the passing of our friend, Stan, but we can take some comfort in knowing how happy he seemed to be just days ago, as he stood on the stage surrounded by many in his NDA family, when he received NDA’s highest award. We are thankful he was able to be there for that special moment,” said NDA Executive Director Brian Glasgow.