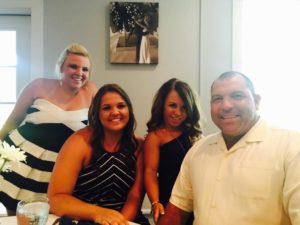 NDA: Pat, tell us a bit about yourself—where you grew up and live now…and your family.  Besides work, any hobbies or interests?

PAT: I was born and raised here in Portsmouth, Ohio.   My home and work are based here.   My wife, Leanne and daughters, Andrea and Ashley, are here.  Besides City Amusement and family time, I mainly enjoy playing darts and golf and following the action in an array of sports.

PAT: In 1989, my family purchased City Amusement, which was primarily a cigarette vending route.    I joined industry trade groups–both national ones and here in Ohio—and attended their trade shows and around 1992 or 1993 and started to see dartboards as an opportunity.  I met with Mike Gannon and Bob Wiles, who were then with Valley (now with Arachnid) at an Operator seminar, bought a few boards and it springboarded from there.   I have customers in Ohio, West Virginia and Kentucky.

I started playing darts as a way to get others to play and to hold their hand and get ‘em interested in playing in leagues.  I was always an athlete in school, but you reach a point where you still want to get out and compete and put your hand-eye coordination to the test.

But it was tough back then.  Few realized that plastic darts was “a thing.”   A lot of bar owners were hesitant to let their drinking customers have access to what they thought were steel-pointed javelins in their locations.

I remember the first night of our first league, with four teams.   There was supposed to be at least one girl on each team.   Actually, we still have that in some of our leagues.  So, one team has three guys show up without a girl.   So they approach a woman at the bar, and let’s just say she had been there for a while.   And this is back when we had to fill out the forms by hand.   So with some help, she gets to the throwline and manages to hit the board with all three darts.    She then goes back to the bar and soon, it’s her turn again, and I’ll never forget that she turned to us at the bar and says: ‘What, I have to throw them again?’

I’m thinking this league stuff is never gonna fly.   It almost came to a screeching halt right then and there, but she–and we –somehow got through it and it grew from there.   That original Wednesday night Portsmouth league now has 42 teams.

We saw an uptick in darts through the 90s and early 2000s as better products came out for scoring, and backup features; better quality darts and flights; and the dart business continues to be sustained by better league and tournament software, remote capabilities and cameras and other technology.  We’ve come a long way since the days of manual scoring and house darts.

NDA: Besides owning machines and running dart leagues, you’re also a dart player.  How long have you been competing in leagues and tournaments?

PAT:   Back when I first brought darts into the business, I was playing every night of the week.  When we started a family, I cut back, but I still play in two leagues, one of them is that original Wednesday night league I mentioned.

NDA:  What do you like most about darts—as a player and as it relates to your business?

PAT:  Darts, as a part of my business, takes a lot of time and effort.   There’s a lot of work for the financial return it generates.    To me, however, it’s rewarding to be at a location where we’re running a dart event.   Without darts, the place would be empty.   So, I’m providing product and a service for my customers.   It’s not about the money, but at the same time, it is an investment in and with my location customers.   A well-run league is better than any contract I could have with a location.   It goes a long way in strengthening relationships.

And as a player, it’s about the lifetime friends I have, who I would have never met if it weren’t for darts.   Through playing darts, I’ve gotten to know lots of really good people from all walks of life.   I still focus and enjoy competing hard as a player, but it’s the social aspect and the personal friends I’ve made through darts that is what I like most about being around the sport.

NDA:  So much for your term as NDA President being easy or boring.  How would YOU describe the first 2.5 months of your term?

PAT:    It’s been a whirlwind and recently, tough decisions have been required as part of the position.   When you volunteer to be part of an organization’s leadership, you never know what types of situations will arise.   But I am fortunate to have a lot of awesome people around who have, collectively, hundreds of years of experience.  I may be the captain right now, but I am not steering the boat by myself.  It has been challenging, but we are all doing the best we can.

NDA:   This year’s Team Dart was shaping up to be a special, memorable event.  Unfortunately, due to the pandemic, NDA canceled the event that would have been just getting underway yesterday evening.  Now that it’s been a couple of weeks since the decision to cancel Team Dart was made, how do you feel about things?

PAT:    Primarily, I’m saddened and disappointed that it was necessary to cancel the tournament.   So many   people—players, operators, manufacturers, suppliers and other  partners—look forward to it.    It’s such a well-run and fun event.    But at the same time, I understand it would have been impossible, given the mandates and closures that have been put in place to battle the virus.   Right now, I’m looking to the future, as I have three tournaments scheduled for later this year and two of them are brand new.   So, in spite of the bad news we are bombarded with these days, the game of darts is not going away and will come back strong when this crisis is over.

NDA: What have you and your family been doing to get through these challenging times?    What is your typical day like?

PAT:  Right now, I am still going to the office and still working in the warehouse.    There, we are trying to make the most of our time with our locations shut down.    Both of my daughters—one a teacher and the other an office administrator—are working remotely from home, as is my wife, Leanne.

We’re watching the news, trying to stay positive and get through this like everyone else.

PAT:  Through the first of May, I think most people will be staying home.  I’m hoping we see some return to normalcy in June and then, things rebound in mid-summer.     It’s gonna be a while, but we’re resilient and people will be anxious to get back to the things they like doing:  like playing darts.