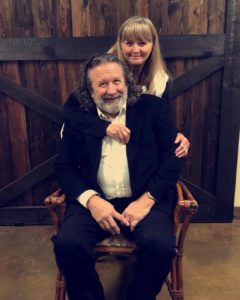 (Editor’s Note: In the coin-op/darts universe, Bernie Marsh has virtually done and/or seen it all. He’s been a darts player, a bar owner, an amusement/coin-op route operator, a Master/Head NDA Referee, NDA President and member of NDA’s Hall of Fame. Currently, he serves on the association’s Tournament Committee and each year, is joined by members of his family who work at Team Darts).

NDA: Bernie, tell us a bit about yourself–where you grew up and live now…and your family. Besides work, any hobbies or interests?

BERNIE: I grew up on a small farm/ranch/dairy farm in North Dakota. We were quite diverse as most small farms in our area were. We milked about 30 cows and ranched about 60 head. We raised pigs, chickens, turkeys, ducks and geese. We also farmed small grains.

My family consisted of my parents and a sister eight years older than me. I did not know my sister much because we went to a Catholic boarding school and with the age difference she was in and out of school before I got there.

I attended the boarding school for grades 1-8. I went to high school and college. I have an associate degree in Radio Broadcasting.

I married my high school sweetheart in 1978 and we now have eight children and 13 grandchildren.

I really don’t have any hobbies. If I have free time, I am either at our farm or our South Dakota home.

My true form of relaxation is my motorcycle. It has always been a lifestyle for me. I never had a bicycle until I got to college. Growing up the way I did I rode a lot of horses. My parents bought my first motorcycle in 1966. It was a Yamaha 100 Enduro. I was in the sixth grade and I rode it to and from school in the fall and spring so I could be home to help with the morning and evening chores. I did board in school in the winter months.

NDA: How did you get into the coin-op business and specifically, darts?

BERNIE: We bought Bernie’s Esquire Club in 1987. In 1990 I was dissatisfied with the coin operator that was servicing our bar. We were one of his larger accounts. I did call him in for a meeting to discuss our concerns and dissatisfaction. I was laughed at. So, we started Lady Luck Vending and we bought 20 Valley dart boards. We also had to buy juke boxes, pool tables and bar top video games. Since darts was somewhat in its infant stages that is what we concentrated on. We joined the NDA so that we could get guidance in forming and running leagues, darts and pool.

NDA: So, you owned a bar, then started an amusement route. How long did you do both before selling your coin-op route business?

BERNIE: We operated Lady Luck and ran Bernie’s Esquire Club side by side for 15 years. Our biggest challenge was to make sure we did not show favoritism to our own location. We strove to make sure the other locations got their share of promotions.

As both businesses grew it became more difficult to give them the time they needed. I thought the locations and players were not getting the attention they needed. For this reason I decided to sell to my old operator. Six months later I remembered why we started Lady Luck. I was very grateful when he sold to my current operator Badlands Music. They are doing a great job.

NDA: When and how did you start playing darts and how’s your game?

BERNIE:     I think I started to play darts in 1983 and joined leagues in 1985. I joined for the social atmosphere but soon found I liked the competition of the sport. Now I play for the camaraderie and social atmosphere that the sport of darts offers, usually my friend Jack Daniel comes out and joins me on league night.

NDA: You served as NDA President 17 years ago. What was that like?

BERNIE:   It was very humbling a for me. I am from a small town in North Dakota and my peers trusted me to be in that type of leadership position.

It was also very exciting because we were working to unify darts worldwide and we took several trips to Europe. It did not work out as we had hoped, but it was an exciting time.

NDA: For many years, Team Dart was very much a family affair for you. Tell us about that. That’s still the case these days, right?

BERNIE:     To me there are two sides to the term “family” and Team Dart. I mentioned that I have eight children. They all came to Team Dart with us. Our youngest was born in January and was at The Riviera in May. All eight children have worked Team Dart, and some still do.

The other family is the group of selfless volunteers that work to make the event a success. They have to love it or they would not be there. You learn to trust and depend on the staff that you work with and you bond into an extended family.

Some of the faces change and many stay the same. We all work for the same goal which is the NDA and to promote the growth of electronic darts.

NDA: Since the time you first got involved in darts, what’s the biggest change you’ve seen in the industry over the years?

BERNIE: There are two changes that have dramatically changed darts. The first is going from CDA to PPD and MPR. This gives the players a more even ranking.

The second is the technology incorporated into the dart boards. This gives us the ability to go from paper scoring to machines doing it for us. The player now just has to pay his league fees, order a drink, and play darts!

NDA: What’s the coolest thing you’ve gotten to experience as being affiliated with the darts industry?

BERNIE:  The opportunity to be an international dart referee. I got to referee in Holland, Spain, France, Switzerland, Croatia, and 5 times in China. I got to work with people who all have darts in common and influence how they play the sport.

NDA: What was it like being inducted into the NDA Hall of Fame back in 2012?

BERNIE:      It was a very humbling experience. Once again being from a very small town in North Dakota and having your peers vote for you to have this honor is very hard to describe.

NDA: Yet another dimension you bring to the darting world is being a referee. How did that evolve?

BERNIE:  When I got elected to the NDA Board of Directors, there really was not much for rules. If there was a discrepancy at Team Dart, it went to the Tournament Director and he made the call. As the sport of darts and Team Dart grew, the NDA realized to be the leader in the sport they needed to have consistent rules.

“Give it to the New Guy” – So with the help of the Tournament Committee, we took the few rules we had and put together the NDA Official Rules. They have evolved over the years as technology changes. They are now the standard worldwide. We do review them yearly. We also put together the referee course, test and levels referees can achieve.

NDA: What’s your favorite and least favorite part of being a dart referee?

BERNIE: My most favorite part is knowing the players trust and respect you to make a fair call. While doing tournaments in Europe and China, I gave the Olympic Oath of Fairness at every Opening Ceremony.

The least favorite part is when you must make a call and one of players is using the rules to get the win. It is very frustrating, but you must make the correct call.

NDA: What do you like most about the sport of darting?

BERNIE: The love of the sport that brings all the players, staff, and administration together.

NDA: If you could pick one person who you would like to play darts with or against, who would it be?

NDA: One of the tough decisions made by the NDA board recently was the cancellation of Team Dart. Your thoughts on this?

BERNIE:  I was really on the fence on that decision, fortunately the Board thought with their heads and not their hearts and made the right decision.

NDA: What have you and your family been doing to get through these challenging times? What’s a typical day like for you?

BERNIE: My wife Paulette and I have quarantined ourselves from the world. Our children continue with their lives while keeping their distance from us. We have relaxed from that a little bit. The State of ND closed bars on March 19, 2020. We have been using this time to clean and do upgrades.

Typically, Paulette gets up at 6am and I get up at 7am. I have been going to the bar and doing whatever I can to complete the task for the day. I usually get to bed round 11pm.

NDA: No one has a playbook on this, but what is your outlook for the next 6-9 months?

BERNIE: That is such a tough question. Who would have ever thought we would be closed for 6 plus weeks? We cannot continue to have our country and world continue the way it has – hopefully we can have a cure of some sorts soon.

NDA: What is your favorite…

…Music or Band: I like 60’s music because it’s about simple fun, but my favorite band would be Metallica or Pandora.

…Things to do in Vegas: Moondoggies and Naked City Pizza, going to the local shooting ranges and getting reflexology massages.

NDA: Anything else to add?

BERNIE:  I have so much to be thankful for from my involvement with the NDA. The opportunities that I have enjoyed and the many people that have worked and socialized with over the years. I believe that the opportunities, the people, along with the NDA has and continues to shape and define who I am.

The NDA is the type of organization that becomes your family. The more you put into the organization seems to double and triple what comes back to you. The years I worked with Joe Conway and Leslie Murphy and now Jack, Brian, and Rachel have etched memories into my mind that are irreplaceable.