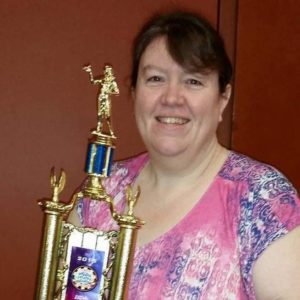 NDA:  Mary Beth, tell us a bit about yourself—where you grew up and live now…and your family.  Besides work (and darts) any hobbies or interests?

MARY BETH: I was born in Fort Walton Beach, Florida (Father was in the Air Force) Moved back Fort Wayne, IN at 1.5 years old (to parents’ hometown) and have been here or near here since. I have been known to crochet, knit, and cross stitch. I love to read.

NDA: What do you do for work these days?

MARY BETH: I am a in purchasing and outsourcing agent for an industrial electronic repair and calibration company. I am also the dart league coordinator for Advance Gaming in Northern Indiana.

NDA: How and when did you start playing darts?

NDA: Before the virus changed our lives and routines, how often were you typically playing?

MARY BETH: I play league 3-4 nights a week and practice on my V-dart board the other nights.

NDA: When you aren’t playing in league or tournaments, how often do you practice and what is your approach/routine?

MARY BETH: I play all year around and play as much as I am able to. I go to as many tournaments as I can afford. Play, Play, Play.

NDA: Who is your dart league coordinator/operator and what value does he/she bring to the table?

MARY BETH: Ace in the operator and they have brought a lot of new opportunities to the Fort Wayne area since becoming involved in darts (since last October) Many new boards closer to home and working with the darters to create fun and fulfilling leagues.

NDA:  What’s the coolest thing you have gotten to experience as an elite dart player?

MARY BETH: I have several things that are about equal. I played in the ADO 501 Playoff in Stamford CT 4 years in a row and once in the cricket playoff. I have been our state Ladies champion 2x in the last 4 years. And I think this year would have been the best, by playing for Team USA in Vegas (we all know how that ended up)

MARY BETH: Competition, the environment, the family we have created, the travel I have had to play, etc, etc, etc.

NDA:  What advice would (or do) you give to new/novice dart players?

MARY BETH: Give it try and keep trying. We all were at your level at one time. Practice does help.

NDA:  If you could pick one person, you’d like to play a game of darts with, who would it be and why?   (It doesn’t have to be a dart player…it can be anyone!)

MARY BETH: There are so many players I would love to match up with or against. My favorite so far is: Stacy Bromberg. I was able to partner with her in the Women’s doubles in CT one of the years I played out there. It was great playing with one of the best if not the best female darter.

NDA: You’re a veteran of NDA’s Team Dart and a member of Team USA.   How many years have you been competing in Las Vegas and how do you view this event among the many you participate in?

MARY BETH: I have attended Team Darts for 2 years; this would have been my 3rd. I love the atmosphere and the competition.

…Movie: None stands out

…Music or band: I like most bands, country, pop, rock

…Food: Chicken, I will eat just about anything with chicken in it.

…Things to do in Vegas (besides playing darts): sight see, photography, gamble.

NDA:   This year’s Team Dart was shaping up to be a special, 35th anniversary event. Unfortunately, COVID-19 compelled cancellation of this event. It’s been a few weeks since the decision to cancel Team Dart was made.  What’s your take on this?

MARY BETH: Some things have to be dealt with. Not happy it was cancelled, but life goes on. There will be time for more darts in the future.

NDA:  Finally, what have you been doing to get through these challenging times?    What is your typical day like?

MARY BETH: Work, check in on mom (she had basically 3 surgeries in February and early March, damned cancer) drive home, eat and try to get online games in with my V-dart board.

NDA: Anything else you care to add?

MARY BETH: Thanks for helping keep morale up, I love these bios.