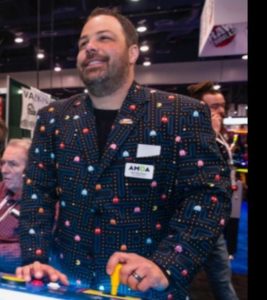 NDA: Bob, tell us a bit about yourself—where you grew up and live now…and your family.  Besides work, any hobbies or interests?

BOB:  I grew up in Colorado.  I was born in Cañon City and moved shortly thereafter to the Fort Collins and Loveland area. That’s where we hung our hat and where the business started.

My wife, Sheri and I have four children:  Kylie, 16; Drew, 14; Jason, 10; and Kate, 6.  As far as hobbies, I enjoy hunting and restoring old classic cars and trucks.  I also do a lot of night fishing with the boys for walleye.

BOB: Eighteen years ago, I bought a pinball machine at a garage sale for $350.   It reminded me how much I loved to play, so I contacted a bowling alley in Greeley and asked about their pinball machines and they didn’t have any to play.  I had some cash from my lawn service company that I had recently sold, so I talked to the owner of the bowling alley and we quickly came to an agreement on adding some pinball machines to his location. My grandfather, Gramps, lent me $5,000 to buy some video games and that was how it all began! I was also selling trucks at the time and so I decided that when I got to 20 locations on my route, I would leave the truck business, which I did. We are now at over 100 locations! I’m about 30 miles from the Wyoming border and I had bar owners in the Cheyenne area who asked me to start dart leagues.   Excited for a new adventure, I bought 10 boards in 2015, and started my dart leagues and joined the NDA.

NDA: As owner of Paradise Pinball & Amusements, what do you see as the core strengths of the company?

BOB: We are family owned, and I try to emphasize that approach with my bar owners, most of whom are also family businesses.   Because of this approach, we have an understanding of their needs and bring that to the relationship with our Paradise customers, league coordinators and extending to players as well.

BOB: I like the fact that most dart players are out to have a good time. They play and have fun.   They’re awesome and they are thankful for anything we do for them, and we appreciate and support them in return.

NDA:   You’ve been around countless novice players.  What’s the best piece of advice you give to a new player?

BOB:   Part of it is practice, practice, practice.  We try to nurture and encourage our new players.  We tell them they don’t have to be great players to join a league and to have fun.   We have always had leagues for beginners.   In fact, one of my top players in Cheyenne is very good with new players and will often play with people who have never played before.   Several years ago, he and I put together six, four-person teams of new players and we showed them the game.   Four of those six teams are still with us today. Once they experience it, they come back.  Our leagues have been growing every year and this spring would have been the biggest season we’ve ever had.

NDA: If you could play darts with (or against) any person (living or deceased—whether a dart player or not), who would it be and why?

BOB:  My grandpa.  We used to throw darts in his garage when I was a kid  He passed away six years ago.   He never worked in the industry or played competitive darts, but he would regularly take me to the local arcade and give me a roll of quarters—which was a lot back then—and we’d play in the arcade for hours.   He was my inspiration to get into the business and helped me with the money to get it up and running.  I still have his steel-tip darts.   He was just a great guy.

NDA:  You’ve been around this industry/sport for a while now.   What’s the biggest change you have seen over the years?

BOB:  The incredible impact of technology.   We’re running remote leagues 130 miles away…co-op leagues in locations in different states.   We want leagues in our locations, but we’re so spread out around here that it makes it challenging.   In Wyoming, there are about 600,000 people and there may be one bar in a town and the next one is 40 miles away.   Technology has made it possible to overcome this challenge.   It’s exploding.   And with different forms of payment systems—again made available through technology—it’s even easier.

NDA:  You have been involved in the leadership of NDA’s sister association, AMOA (Amusement & Music Operators Association), for several years and just recently joined the NDA board as AMOA’s liaison on/with NDA’s leadership.  Any specific goals as you begin your tenure in this capacity?

BOB:   I hope to bring knowledge from both associations to create a cohesiveness and help make both organizations stronger. I am passionate about the association work that I have been a part of to date and I am really excited for the opportunity to be involved with the NDA leadership in this capacity.

NDA:  The geographic area you live and work in has not been as adversely impacted by the coronavirus nearly as much as other, more densely-populated areas.  What’s the current status with re-openings in your trade areas?

BOB: We’re sitting in a holding pattern.    In both Wyoming and Colorado, we’re looking at Phase 1 of the re-opening, where some retail businesses are allowed to re-open with limitations, on May 1.   But, with a 10-person occupancy limit—which includes staff—many have not re-opened yet.   Phases 2 and 3 are when bars and restaurants will open with limited seating.    It’s been a real challenge to have any clear view of the future with what the new normal will be. This industry is made up of resilient people and I know we will come back strong.

NDA:  What have you and your family been doing to get through these challenging times?    What is your typical day like?

BOB: Honestly, I’ve been staying extremely busy.  I’m doing things around the house that I haven’t had time to do.  As far as work goes, our shop at work has never been cleaner and we’ve caught up on game repair, so we’re ready to rock when things open up.   We’ve also been moving some old equipment and I’ve been spending more time with the family than ever, which has been great.

BOB:   I’m not sure, but we expect that many will pull back from their routines for a while.   There are concerns and unknowns about the virus coming back, so that’s a factor on how things go, but we’re focused on the re-launch and getting back up and running.

And as far as darts, it’s a social thing.  I know our players are anxious to get back to playing.   They miss their friends.   We’re planning some things—like a big blind draw tournament, perhaps—where we can use some money to support our local communities.   Everyone is looking forward to getting back to playing.

…Movie:  Days of Thunder or Braveheart

…Music or band:    Led Zeppelin and a local group, Big Head Todd and the Monsters. I rented their band a bubbler jukebox for a music video of one of their popular songs:  “I Get Smooth.”  You can check it out on YouTube!

…Things to do in Vegas (besides being involved with shows and tournament there)—I like to visit the Pinball Hall of Fame there, and Kount’s Kustoms car shop.  And, while they’re harder to find these days, a good buffet.

NDA: Anything else to add?

BOB: I love this great industry that I’ve had the privilege to call my work home.  I love all the people I’ve had the privilege to know–from other operators and those on industry association boards to all the great location owners and league players. It’s truly a great industry and I just want to say to everyone: hang in there and hopefully, we will all be back in our favorite places playing a game of darts with some friends soon!