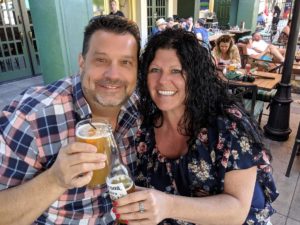 Editor’s Note:   In virtually every industry, there are developments and improvements that “move the needle” in the evolution of programs, services and events.   During the past eight years, in the sport of electronic darting, a Canadian company, CompuSport, has introduced a series of enhancements that have been “gamechangers”—literally–making an immediate, dramatic impact…in areas such as scheduling, board assignments and continuous play.

History:  As a young pool player and tournament organizer, Nil Gaudet of Rouyn-Noranda, Quebec, Canada, wanted to come up with a better way to run tournaments.  He approached a college mate, David Bouchard, about “building a better mousetrap.”  They pursued the idea as a school research assignment, and soon enlisted a university programmer, Francis Cote, to assist.

The project continued as a weekend hobby as the trio were all were working at the University.  Soon after a successful test of their system at a Canadian pool tournament caught the attention of Gary Benson of High Country Promotion in Colorado, it made its U.S. debut at VNEA’s Valley National 8-Ball Championship in Las Vegas.

Following the rollout at VNEA, a pair of South Dakota operators Alvin Gerlach and Britt Bruner—both leaders in NDA–recognized the potential benefits that could be applied in darts.   After connecting with CompuSport, NDA made the decision to move forward and utilize CompuSport’s tournament management system at Team Dart 2013 in Las Vegas.

The partnership got off to an auspicious start, when printing glitches on the opening night forced tournament organizers to revert back to the old, manual methods.    For the next 48 hours, Nil, David and Francis worked feverishly on the fix.   “We just weren’t ready for the shorter, faster schedule of darts,” Nil said.   But, they not only recovered onsite and were able to showcase the system’s capabilities, the concept of continuous play—where match cards automatically print out once the system pairs players/teams with available boards–was created on the spot.

Since then, NDA has worked closely with CompuSport on developing an Association software tool that embraces membership, tournament registration and management, player sanctioning, accounting and other functionalities. The organizations continue to collaborate on improved features and capabilities.

Nil notes: “For the industry, I’m CompuSport’s face, but for me, CompuSport is a team accomplishment and the company was born from our common passion and hard work.”

As CompuSport–like all of us–anxiously waits for the coronoavirus to run its course, they are finalzing details for its long-anticipated player app. NDA visited with company co-founder Nil Gaudet…

NDA: Nil, tell us about yourself…where you grew up and where you live now.

NIL: I grew up in Ville-Marie, a small town in the area of Temiscamingue northwest Quebec at the Ontario border. When I was 18, I moved to Rouyn-Noranda for college and continued to live there to work at the University and then at CompuSport.

Besides work and family, I enjoy moose hunting and walleye fishing.

NDA: What is the biggest change you have seen in the darts industry since you first started working in it?

NIL: The remote tournaments are one of the best things that happened in this industry. The automation of tournament management improved board assignments, stats results accessibility and communications between tournament managers and players.

NDA: What is the coolest thing you have experienced as part of the darts community?

NIL: I really enjoy the social gatherings with NDA people, the operators, staff and players at the championship in Las Vegas, and also during the “Dart Smart” convention. I remember ones in St. Louis and Milwaukee as good times.

NIL:  The social part, being around people and having fun playing.

NDA: What have you been doing to get through the pandemic?  What is a typical day like for you?

NIL:  I live with my girlfriend and her two sons (12 and 21). I get up earlier than they do, so I have time to focus on CompuSport projects.   We have worked on some renovations in and outside the home, played a lot of cards and pool and taking walks.

It’s been really hard. My kids are in Rouyn and the town is closed.  I can’t see them and really miss being around them.

NDA:  How has it affected CompuSport’s operations?

NIL: Francis, David and Christian and I have all been working at home for the past five weeks.  We have calls and video conferences, but it is not quite the same as being together in our office.   We also have seven programmers working full time on projects, particularly our player app.  We are excited about the player features being incorporated into the app, such as personal profiles, pictures, statistics and comparisons with other players.

NDA: What about this year’s Team Dart?

NIL: We were really disappointed it was cancelled, but understood it had to be done.  Not just for us—the players and people who work the tournament—but for the elderly and other who are vulnerable if they get infected with the virus.

NDA:  If you could play a game of darts with any one person, who would it be?

NIL:  Gary Benson.  I played pool with him and he had a dart board at his place, but we never played (he died in December 2019).  We were really good friends and he is the one most responsible for launching CompuSport.  We have a picture of him in our office, with the title: “Father of CompuSport.”

NDA: What is your favorite:

–Movie: Back to the Future

–Things to do in Vegas (when not working tournaments): Fremont Street